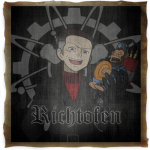 Hello, everyone, my name is Lee Walton and I am a soon-to-be writer of an upcoming project I am currently working on that has nothing to do with this TV show whatsoever; I am also a full-time gamer

I used to no longer watch it, especially when my younger brother occasionally watches it while I'm babysitting him. I can speak only a limited amount of certain languages, especially German (you will see why down below).

I have an interest in villains, whether from Films, TV or games, especially a certain character down below who has been my all-time favorite ever since his first debut appearance in 2009 in a downloadable content pack for a 2008 video game, called 'Call of Duty: World at War' and has no involvement in this show whatsoever. I rarely do minor edits to some pages on this wiki site, such as: adding more to recently-added information on characters, episodes and locations; correcting spelling and grammar issues; etc. The reason for rarely editing on this wiki site is primarily because I am currently running my own wiki site, where i do most of the work (see the links down below the page).

As my #1 Favorite Character of All Time

Guten Tag, mein Freunde! Allow me to formally introduce to you all. I am ze Great und Powerful Doctor Edward Richtofen, known affectionately as 'Ze Butcher' to mein victims as zey scream in agony moments before I snuff out zeir lights... Hahahahaa!!!

All throughout my career, ze Doctor has been at ze forefront of torture und information extraction research. I am an incurable sociopath und I see no moral distinction between natural death and murder; ze victim is ze victim, regardless of how zeir demise manifests itself. I have a collection of stuffed animals, most of zem posed in positions of terror at ze instant of zeir death. (gasps) ...so wunderbar.

For zose who may already know about me, you may consider me as funny because of my quotations. For zose who don't, go look for my quotes on YouTube or I vill hunt you down und extract all of your teeth... VIOLENTLY!!! Oh, zis warning also goes to those who have abnormally giant beaver-like teeth. AHAHAHAHA!!

My Top 10 Favorite Characters of All Time

Retrieved from "https://fairlyoddparents.fandom.com/wiki/User:Lee_Alan_Walton?oldid=378885"
Community content is available under CC-BY-SA unless otherwise noted.