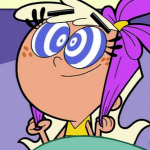 I'm INeedAJob9, and I am an admin for the wiki.

Soooooo I'm one of those fans who grew up with the show, one of my favorite cartoons of all time. Watched it up through 2011-ish, when we dumped cable and moved onto Netflix. Kept watching while it was on Netflix, then it got removed. After that, the series just fell into the back of my mind. Heard about Sparky, didn't like the idea at all, then I forgot about it again.

Then along came Chloe, and I somehow found myself thrust into the FOP world once more, inexplicably starting a now nearly one and a half year love affair with series. Her debut episode was pretty bad, obviously, but I watched the following few episodes, and she really grew on me. Yeah, I know the last couple seasons aren't that great (Granted I've only seen a couple episodes of Season 9 still, but at least for Season 10), but I can still enjoy the seasons for what they are. In a way, I enjoy coming up with ideas/fanfics or headcanons to explain plotholes to make the series better, at least for me. Funner to work with a series/franchise that leaves a lot to be desired than one that does it all for you.

Around August of 2016 or so, I began contributing to the wiki. Since then, I've done several image galleries, including filling up some of the character specific ones that often are left empty. I also help keep navboxes, gallerymaps, etc. up to date. I have overhauled several pages which weren't in the best shape or only partially done, and have brought them into presentable condition, and up to date. I've also made the top 10 editors on the wiki. In January, was promoted to a rollback of the wiki and then to administrator in July.

A big non-wiki related project I am working on currently is a fanfic rewrite of The Big Fairy Share Scare, for obvious reasons. It has a similar structure and some elements are kept, but a lot of things are changed, added, removed, etc. Some core parts of the episode are completely changed, character's motives and story-lines are altered, some scenes are extended, a lot of new scenes are added, and a lot of tie-ins to older episodes. I could go on, but I don't want to spoil a lot. Follow my DA or Tumblr as I might post updates at one or both of those places.

Retrieved from "https://fairlyoddparents.fandom.com/wiki/User:INeedAJob9?oldid=475645"
Community content is available under CC-BY-SA unless otherwise noted.