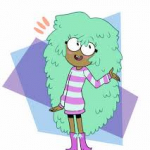 Hey! Cartoonprincess, here! I will come here from time to time to read and edit stuff. FOP is one of my favorite shows of all time!

I actually have quite a few original characters that I created specifically for FOP and Danny Phantom. I didn't create them with the intention of one day adding them to the show, but more for my own enjoyment. I come up with new plots and backstories for them daily. Here they are:

Sylvia (Sydney) Smith~My main character/alter ego. She moved to Amity Park from Brightburg after her parents' recent divorce. There, she meets the love of her life, Danny Fenton/Danny Phantom. (I'm a total Danny/Sydney shipper!) They date for a while, but eventually break up once Sydney realizes that he's in love with Sam. Later, she bumps into Timmy Turner. Cosmo reveals himself to her, by accident. As it turns out, Sydney is a major fairy freak! Jorgen tries to take away Timmy's fairies, but Sydney gets really enraged, and scares Jorgen into letting him keep them. She has known the secret and befriended Timmy and the rest of Fairy World ever since. Sydney's main traits are sweet and sassy, easily angered, headstrong, stubborn, whiny, sarcastic, insane, selfish, depressed and overall, emotionally confused. This is due to her parents' divorce. Something that she struggles to accept. However, as much as they annoy her, she truly does care about her friends and family. She has long, wavy brown hair, pink eyes, and in usually wearing a top with a flower on it with jeans and sneakers. She is obsessed with lipgloss. She is of Australian, British and Puerto Rican descent. She was 13 when her parents got divorced, 14 for the majority of the plots, and then 15, onward.

Jared Smith~Sydney's little brother, whom she was briefly separated from during divorce complications. She eventually tells him about Fairy World, much to Jorgen's greif. He is a known ladykiller, but also very sensitive and levelheaded. He loves, animals, singing and girls. He is 10 when he is first introduced, and then 11, onward. He is allergic to many things, mainly cats and their collars. He hates being compared his sister. His favorite artists are Chicago, Elton John, Billy Joel and the Beatles. He looks similar to Sydney, with a shag, and pink eyes. He has a very messy room.

Lilly~Sydney's best friend. Very cheerful, sweet and beautiful. She has blonde hair and blue eyes. She is into art, fashion design and makeup. Jared was in love with her since he was a toddler, but, eventually got over her.

Roger~Binky's godkid who is in love with Sydney. Also a good singer. Jared used to hate him, but later, they became good friends.


Jessie~Cupid's godkid who is obsessed with Jared. Jared hates her, at first; to the point of calling her "nightmarish" when being called "dreamy" by her. But, eventually returns her affections. They dated until Jessie got too jealous and possessive and they broke up. She has brown hair in a ponytail with green eyes. Usually wearing red.&nbsp

Cassie~African American godkid/new girl in Fairy World, whom Jared is smitten with. She is always playing with his emotions and breaking his heart. She is good friends with Jessie. She has bright, blue eyes and big hair. She enjoys singing, as well.

Mark~Sydney's "camera cutie"/camera boy for her T.V. show.(She is a part time local reporter.) He secretly likes Sydney, and loves filming her. They eventually date.

Retrieved from "https://fairlyoddparents.fandom.com/wiki/User:Cartoonprincess?oldid=60207"
Community content is available under CC-BY-SA unless otherwise noted.