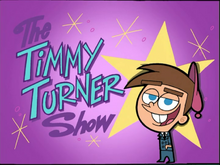 The Timmy Turner Show is a television show broadcast from Timmy's Treehouse. Trying to quickly put together a history report, Timmy Turner wished The Founding Fathers from 1770's America into the present so that he could interview them on this show.

Cosmo and Wanda used their magic to liven up the show. It is a parody of late night television comedy and interview shows, and it even has a band that plays a theme song.

Retrieved from "https://fairlyoddparents.fandom.com/wiki/The_Timmy_Turner_Show?oldid=504997"
Community content is available under CC-BY-SA unless otherwise noted.