The Fairies was the name of a band formed by Cosmo in the episode "Boys in the Band".

The band consisted of Cosmo on the electric triangle, Pan on the pan flute, Santa Claus on the drums, and Beethoven on the organ. They were immediately booed and pelted with tomatoes by a riled crowd of angry Chip Skylark fans that were awaiting his appearance.

The crowd at the Dimmadome for Chip Skylark's concert was beginning to get restless when Chip would not show up due to him being restrained down by Vicky at Timmy's house. Timmy Turner sent Cosmo to distract the crowd while he figured out a way to free Chip from Vicky. Cosmo arrived and introduced himself on the microphone, quickly getting pelted with a tomato when he revealed Chip had not arrived yet, and poofed up the band members of his old band who also got pelted with tomatoes. By the time Timmy arrived with Chip, Beethoven was busy fighting back the crowd with a guitar. After Timmy revealed the truth about Chip not being rich to Vicky, he gets Chip to the stadium and the crowd immediately calms down. The Fairies later joined Chip when he sang "Icky Vicky". They have not made any more appearances since. 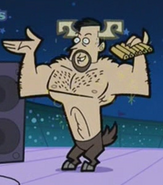 Retrieved from "https://fairlyoddparents.fandom.com/wiki/The_Fairies_(band)?oldid=375246"
Community content is available under CC-BY-SA unless otherwise noted.