Scott Hamilton is a real-life Olympic figure skater who appeared in the episode "The Fairly Oddlympics" in both animated and live-action form.

He was wished into the show by Timmy Turner to be a commentator on the Fairy World Games, although Timmy made him believe that it was all a dream. After the Olympics were done, Timmy wished that Scott Hamilton was back in his house. Scott would later seemingly wake up in his bed with his stuffed animal, noting the moral of the story to his stuffed animal (Cheaters never win and Winners never cheat). He is then attacked by a cheetah due to Cupid thinking Scott said cheetah (he really said, cheater). 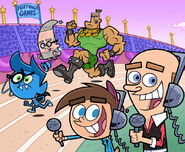