Santa Elves are Elves that appear in the Live Action Movie, A Fairly Odd Christmas.

These Elves look similar to Humans but really short, with pointed ears and unusual clothing involving pointed hats and shoes. They dress like stereotypical Santa Elves. Many of them look like children yet are still hundreds of years old.

Elmer the Elder Elf is an elf, played by Tony Cox. He's the Naughty List keeper. All of the other elves are slightly afraid of him and are happy that they only get to see him once a year, when he presents to Santa Claus the Naughty List.

Dingle Dave and Christmas Carol are two of Santa's Elves. They accompany Timmy and his group on a death-defying journey to find Elmer the Elder Elf, the only one who can remove Timmy's name from the Naughty List so he can help save Christmas.

Tinsel Ted is an elf played by Bjorn Yearwood. He is the elf who informs everyone that Timmy cannot fill in for Santa due to his name being on Santa's naughty list.

Jingle Jill is an elf, played by Dalila Bela, in A Fairly Odd Christmas. She is the elf who greets Timmy and Tootie when Dingle Dave and Christmas Carol bring them to the North Pole. Like Dave and Carol, she does not get along well with the fairies.

The Elves do not get along well with Cosmo, Wanda and Poof, as they have been feuding with the fairies for centuries. The reason for this, stated by Dave at the end of the movie, is that the fairies borrowed a power drill from the elves two thousand years ago and supposedly did not return it (in actuality, Wanda states that they did return it and left it on their back porch). 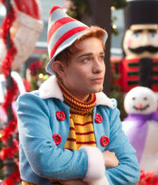 Retrieved from "https://fairlyoddparents.fandom.com/wiki/Santa_Elves_(Live_Action)?oldid=414947"
Community content is available under CC-BY-SA unless otherwise noted.