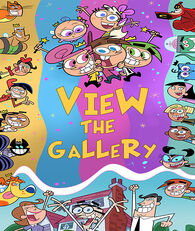 Saber-Toothed Tigers With Night Vision are a trio of animals that escaped the Dimmsdale Zoo.

These tigers were apparently bred genetically since saber-toothed tigers are long extinct. After escaping from the zoo, they seek out residents lost in the darkness that are foolish enough to be wearing pork chop underpants.

In their lone episode appearance in "Lights Out", they appear as a trio of floating eyes. A few times when Timmy Turner manages to shine his flashlight on them, they appear as striped big cats with long teeth.

When Dimmsdale was covered by the absolute darkness Timmy wished for, Chet Ubetcha informs the Turners that they escaped from the zoo and that he is lost (it wasn't a television broadcast, Chet was actually in the room). They appear on the Turner's house and maul Mom (who thawed the frozen beef) and Dad (who smeared his naked body in cat food). They later appeared when Mr. Crocker gave Timmy a fluorescent F, the latter thought their growl was his hunger but Timmy explained the tigers. Crocker stated he choose the wrong day to wear his pork chop covered underpants, which attracted them along with the scent of Crocker's underpants, resulting in him getting mauled as well. Crocker had to get them surgically removed at Dimmsdale Hospital, and the tigers escaped again and cornered Timmy on the roof moments before everything was wished back to normal.

Retrieved from "https://fairlyoddparents.fandom.com/wiki/Saber-Toothed_Tigers_With_Night_Vision?oldid=506810"
Community content is available under CC-BY-SA unless otherwise noted.