Megan Bacon is a character who only appeared in The Past and the Furious. She was one of Cosmo and Wanda's former Godchildren who, in her adult years, would be the founder and creator of Cake 'N' Bacon.

Megan was very violent, bossy and scary. As a child, she seemed to really like Bacon, which could be seen in calling herself the Caped Bacon and having a weapon called a "Bacon Blaster". However, Cosmo and Wanda managed to keep her on the right track by making her do her homework and remain disciplined, despite how scared of her they were. It was shown that if it weren't for Cosmo and Wanda, she would have ended up as a supervillainess in the future.

As a child, Megan is a red-haired girl whose hair was formed into pigtails, had freckles and braces. She also wore a yellow shirt with a picture of bacon on it, a purple crown with three skulls, a red cape, fingerless gloves, and a purple tutu with purple ballerina shoes to match. Her voice has a New York/Brooklyn/New Jersey accent, so she sounds like a gangster/gunmoll.

After Timmy wished he never interacted with her and she made the Cake and Bacon, Megan is shown to wear a standard yellow waitress uniform and hat but maintains her purple mask.

In her adult years (in an Alternate Dimmsdale where she's a villain and did not create the Cake 'N' Bacon) Megan was shown to have lost her freckles and braces, her red hair now resembles strips of bacon, and she wore a villainess outfit that contains a purple mask, dark red cape, a long-sleeve purple shirt with a picture of a bacon on it, white leotard pants and purple ballerina shoes.

As a child, she was terrifying to Cosmo and Wanda, but they still made her do her chores and homework, rather than roleplay as an evil bacon-themed villainess. However, when Cosmo, Wanda, Timmy and Sparky visit her, Timmy interferes and convinces her not to listen to them, which leads to her becoming a supervillain called the Caped Bacon. As the Caped Bacon, she decides to get revenge on Cosmo and Wanda for trying to stop her from becoming the villain she was meant to be. She does this by destroying Fairy World by frying it in a giant frying pan. Timmy goes and gets some of Cosmo and Wanda's previous godchildren. Erg, the Earl of Sandwich and Benjamin Franklin come together with Timmy and Sparky to stop her and succeed. Timmy then wishes that he never interacted with her and things go back to normal. The godchildren and fairies all go to the Cake 'n' Bacon to celebrate, and the non-evil Megan Bacon comes up as their waitress, which was her natural path in life in the non-altered timeline. 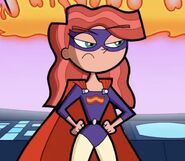 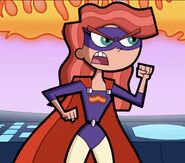 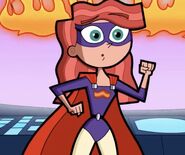 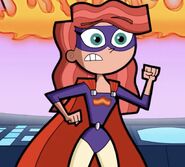 Retrieved from "https://fairlyoddparents.fandom.com/wiki/Megan_Bacon?oldid=524140"
Community content is available under CC-BY-SA unless otherwise noted.