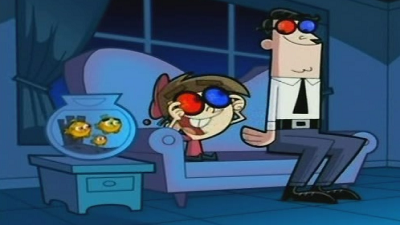 The following is an episode list for the Nickelodeon animated television series The Fairly OddParents. The series is based on a series of Oh Yeah! Cartoons shorts, beginning with the short "The Fairly Odd Parents!".

These episodes are all ordered according to production number.

The Fairly OddParents's first premiered as Oh Yeah! cartoon shorts. The Fairly OddParents first premiered on September 4, 1998 with the episode, "The Fairly OddParents!", plus the first appearance of Timmy Turner and his fairy godparents, Cosmo and Wanda, as well as his evil babysitter Vicky and her Timmy-loving little sister, Tootie. The realm of Fairy World was also introduced, along with Jorgen von Strangle, the self-proclaimed "toughest fairy in the universe", and his girlfriend the Tooth Fairy. Santa Claus made his first appearance, as did the Crimson Chin. Timmy's unnamed parents, Mom and Dad, were also recurring characters, but they had a significantly different character design and their faces were never revealed.

The shorts season ended on March 23, 2001 with the short, "Super Humor", a week before the official series began. From 2001-2004 9 out of 10 shorts were aired on Nickelodeon with Tara Strong dubbing over Mary Kay Bergman's Timmy Turner's voice. Each short has been released as a special DVD on several Fairly OddParents DVDs.

The Fairly OddParents, sometimes simply called FOP or the main series, debuted as a Nicktoon in March 2001. The debut episodes were The Big Problem! and Power Mad!. The series ended on July 26, 2017.

The first season of The Fairly OddParents debuted on March 30, 2001 with the episodes "The Big Problem" and "Power Mad". Among the most significant changes made to the show between the Oh Yeah! Cartoons era and the main series is improved animation, Tara Strong voicing Timmy Turner, Mr. and Mrs. Turner's full body and faces being visible and slightly changed from their original appearance, and Cosmo becoming gradually dumber with a different sounding voice. The first season also introduced a number of recurring side characters who would gain prominence on the show, including Timmy's fairy obsessed teacher Mr. Crocker, his classmates and friends A.J. and Chester McBadbat, popular girl Trixie Tang who would become another love interest for Timmy, alien prince Mark Chang, the freakishly large gray-skinned school bully, Francis, and an expanded universe with the Crimson Chin comics.

The second season of The Fairly OddParents first aired on March 1, 2002, with the episodes "Boys in the Band" and "Hex Games". This season further expanded the universe of the Fairly OddParents by introducing more characters, such as local singing sensation Chip Skylark (voiced by Chris Kirkpatrick), the Anti-Fairies (notably Anti-Cosmo and Anti-Wanda), Wanda's Spanish-speaking ex-boyfriend Juandissimo Magnifico and his spoiled rich godchild Remy Buxaplenty, expanded roles for more of Timmy's classmates such as Sanjay and Elmer, and re-introducing Tootie with a new character design and voice.

The season ended on January 20, 2003, with the episode, "Information Stupor Highway", which was aired after the Halloween special "Scary Godparents" despite being before it in production number.

This season started with the episode "Ruled Out" and featured the first made for TV movie, "Abra-Catastrophe!". It also featured a number of other episodes which explore the back stories of certain characters, such as "The Secret Origin of Denzel Crocker", as well as a holiday special for Valentine's Day called "Love Struck!. Some more minor characters, such as Gary the imaginary friend, were introduced in this season.

The fourth season premiered November 7, 2003 with the episodes Miss Dimmsdale / Mind Over Magic. This season also featured the TV movies Channel Chasers and School's Out!: The Musical, the latter of which was not broadcast until Season 5. The former movie explored the concept that as a child ages and becomes an adult, he must sooner or later give up their fairy godparents. The latter movie introduced Flappy Bob, the owner of Camp Learn-a-Torium, and his eventual defeat and friendship of Timmy led to the end of Camp Learn-a-torium and Happy Peppy Gary and Betty as a recurring threat.

The season (and series, along with the Jimmy Neutron series) officially ended with Jimmy Timmy Power Hour 3: The Jerkinators, after which the show was canceled for nearly two years until it was revived with Season 6.

The sixth season begun with the TV movie Fairly Odd Baby, which gave new life to both the show and a new character: Cosmo and Wanda's baby, Poof, the first fairy baby born in thousands of years. During this season, new episode batches began to premiere separately, usually with one 12-minute part debuting on one day, then being re-run after the next day's debuting episode. The season went into short hiatuses in June, July, and after the special Merry Wishmas.

The season officially ended with the three hour TV special Wishology, which introduced a number of one-time characters and villains.

The seventh season debuted on July 10, 2009 with the episode Anti-Poof, a month after the previous season ended. The season ended on the 5th of August, 2012, with the premiere of Farm Pit in the United States. In other countries, this episode aired one year before. This season introduced Foop, Poof's Anti-Fairy counterpart, as a recurring villain in three different episodes including his introduction special. Mr. Turner's workplace was also established to be a pencil factory, and his boss Mr. Ed Leadly was introduced. Poof starts attending a magic pre-school at the end of the season along with Foop, and their teacher is Mrs. Powers.

This season was ordered after Fairly Odd Baby pulled in over 8.8 million viewers during its premiere.

Season 8 officially ended with the last episode Meet the OddParents on December 29, 2011.

Season 9 was confirmed on March 14, 2012. This season consisted of 26 episodes and the premiere episode, "Fairly OddPet", aired on March 23, 2013. This is the first season to have regular-length episodes produced natively in high definition. This is also the first season to include Poof in the opening sequence. Notable events this season include Poof going through "Pooferty" which ended in him learning to talk, the addition of Sparky the dog to the main cast, and the introduction of a new love interest for Timmy, Missy.

This season was also notable in giving a diminished role to Timmy's school and friends, while giving increased roles to characters like Sheldon Dinkleberg, and Dolores-Day Crocker, who both had episodes about them. Another unique aspect of this season is not sticking to mainly either 11 minute or half hour episodes, having a mixture of both with 9 half hour episodes airing.

The season officially ended on March 28, 2015, with the premiere of "Fairly Old Parent" and "The Fairy Beginning"

A tenth and final season was announced on August 18, 2015. It introduced a new character, Chloe Carmichael, and consists of 20 half hours, making 37 episodes. The season premiered on January 15, 2016 with the airing of The Big Fairy Share Scare.

This season focuses on the friendship between Timmy and Chloe, and with that, a return of a focus on school episodes compared the the previous season. Sparky and Poof were not present for the premiere, with Sparky not expected to return and Poof not coming back until late in the season.

On February 8, 2018, Butch Hartman announced that he had parted ways with Nickelodeon, and confirmed that The Fairly OddParents! had officially been cancelled two days later, ending the series with the premiere of "Hare Raiser" and "The Kale Patch Caper" on July 26, 2017.

A series of three different crossovers between The Fairly OddParents and The Adventures of Jimmy Neutron: Boy Genius were produced as part of seasons four and five. They are counted as numbers 78, 79, and 80 in production order respectively, as they were only counted in the total production numbers after the series had been revived after the first cancellation with Fairly Odd Baby (Ep 81-82). Much like most other specials, none of the events that take place in these cross overs effect the main series, although in the last Jimmy Timmy Power Hour, Chester and A.J. are aware of the existence of fairies which is a direct contradiction to the series and Da Rules.

Crossovers with "Bunsen is a Beast"

In 2017, several Fairly OddParents' characters appeared in fellow Butch Hartman show "Bunsen is a Beast", in an episode titled "Beast of Friends". Bunsen is excited to take Mikey to Dimmsdale to meet Cosmo on Friend-iversary, but trouble arises when Amanda secretly follows them and teams up with Mr. Crocker.

As part of the tenth anniversary of "The Fairly OddParents", a live action television movie spinoff called "A Fairly Odd Movie: Grow Up, Timmy Turner!" aired on July 9, 2011[5] This special showed the lives of many Fairly OddParents characters thirteen years in the future, and focused around Timmy Turner making a decision to keep his fairies or fall in love with Tootie.

With the success of the first film, a holiday-themed sequel, "A Fairly Odd Christmas", was announced and premiered in 2012, and a third movie, "A Fairly Odd Summer", was released in summer 2014.

Characters from The Fairly OddParents have also been featured in a number of cross-over specials with other Nicktoons, as well as a revival special aired on July 7, 2007 (7/7/7) called the "77 Secrets of The Fairly OddParents Revealed!" which revealed, among other things, the full names of some characters, various trivia on the show and it's production, and most notably, the upcoming birth of Cosmo and Wanda's son, Poof, and the revival of the show in 2008.

References to Fairly OddParents in other media