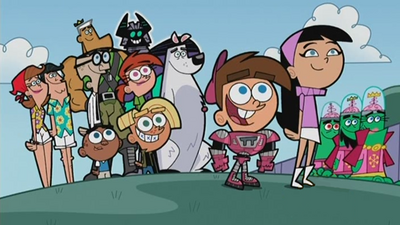 These characters are the central focus of the series, they appear in nearly every episode after their debut, and play a major and/or supporting role.

These characters often play major role in the story, oftentimes having several episodes that focus entirely on them, but are not alway

These are characters that only make a few appearances, but play a major role in those few episodes. Their subsequent appearances after their debut are generally "sequels" to their debut, or closely connected. (Ex. A wish of Timmy's comes back for revenge in a later episode). They rarely appear unless they are a central focus, although they may appear in a cameo.

These are recurring characters that have appeared in a handful of episodes, but rarely do they ever have any major effect on the plot, and typically serve as background/group shot fodder. Some will occasionally play a major role in an episode, with many of the more relevant ones having an episode or two with them in a central role.

These are characters that have only appeared in one episode, but played a major or supporting role in their lone appearance. Some of them have also appeared in other episodes in background shots.

These are characters that have only made a few appearances, usually as a bit characters, and have little to no effect on the story. This also includes one-time characters who were not major characters in an episode, often only appearing for a one off gag. There is usually not much known about these characters.

Several alternate forms have appeared of the characters, usually as a direct result of wishing.

These are one-time characters that appeared in the show-within-a-show spin-off, "Crash Nebula", which was broadcast as part of Season 5. However, the spin-off was never picked up as a series by Nickelodeon, and none of these characters have appeared since.

The tenth year anniversary special "A Fairly Odd Movie: Grow Up, Timmy Turner!" are played by live action characters. Thirteen years have passed since the main series, and everyone but Timmy Turner has grown up.