It first appeared in Future Lost as a version of Dimmsdale created by a wish from Timmy to make the place futuristic like in a science fiction book he read. Unfortunately as he only read the first chapter of the Stevie Sparks book, he did not realize that the book was about robots who rebelled against humans until it was too late. It appeared again in Fairly Old Parent when Mrs. Crocker wished to eat a cake in the future so that she could eat a cake with no calories. She had to escape after a robot was going to arrest her for being unable to pay for it.

This version of Dimmsdale is futuristic, with flying buildings, robots serving humanity's every need, and everyone living in luxury.

Every single building in futuristic Dimmsdale are suspended in mid-air by anti-gravity devices, and the denizens of the city get around in flying cars.

Timmy was amazed by how much technology can make things easier after reading a science fiction book, so before he even finished the book he wished that everything was just like what the world in the book was like, futuristic. In the future world, Timmy's alarm clock plays a holographic Chip Skylark concert, breakfast is instant, as is school (which unfortunately leaves Francis with plenty of time to bully Timmy), and robots serve humanity's every need. Things were not as they appeared though, and just as Timmy asked what could go wrong with the wish, the robots turned on humanity and took over everything, swearing allegiance to the Big Brain that controlled them. It turns out Timmy did not read the book all the way through(he only read the first chapter and he found out what the book was really about after getting rid of some dust on the book) because the robots revolting is exactly what happened in the book after chapter 1, so Timmy uses the climax and ending of the book to find the location of the Big Brain. With Mr. Crocker's help (Mr. Crocker was a buff janitor who spasmed about robots being evil in this universe), Timmy was able to give the Big Brain a serious case of brain freeze, freeing the robots from his control. The robots stood down and swore allegiance to Timmy, who was able to use Cosmo and Wanda (who had been disguised as robots, and then taken over by Big Brain until the latter's defeat by brain freeze) to wish everything back to normal before something else went wrong with the futuristic world because of the robots. In Fairly Old Parent, Mrs. Crocker gets Poof as a Godparent after the Fairy Council tests old people getting Godparents. She eventually wishes herself into the future to eat cake, with the idea that she will remain trim in the past. After she finishes, a robot tells her that she has to pay in government credits or spend 20 years in Work Camp 9. She wishes for a Laser Rabbit to destroy the robot and escape. 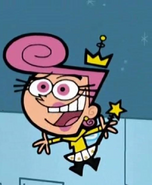 Add a photo to this gallery
Retrieved from "https://fairlyoddparents.fandom.com/wiki/Futuristic_Dimmsdale?oldid=510814"
Community content is available under CC-BY-SA unless otherwise noted.