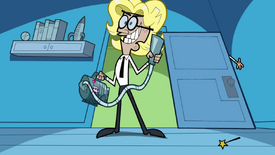 Fairy Hunters are humans who specialize in hunting down and capturing fairies.

There are only two known active fairy hunters in the series canon, Denzel Crocker and Mary Alice Doombringer. It is unknown if there are any other fairy hunters in the world, but there are also monster hunters, and Timmy Turner's parents themselves once masqueraded as ghost hunters. It seems highly likely there would be many considering there is a demand for therapy for the "fairy impaired".

The primary fairy hunter in the series is obviously Denzel Crocker, who serves as one of the main antagonists of the series. As proven by his many inventions and evil plans, he is very intelligent and has a lot of ingenuity. However this is heavily offset by his insanity and ignorance, which often comes back to get him, usually resulting in his plans failing. Despite this, when the stars align, he can prove to be incredibly capable and dangerous. The most notable example of this is Abra-Catastrophe!, where he nearly gets away with capturing Cosmo and Wanda and taking over Earth. He was only defeated when Timmy purposefully revealed his fairies causing them to be sucked back to fairy world, rendering him powerless.

The only other known fairy hunter in the series is Ms. Doombringer. Unlike Mr. Crocker, she appears to travel from place to place to capture fairies. She masquerades as the pleasant substitute teacher named "Ms. Sunshine", and fools godchildren into wishing her into a permanent teacher, indicating that there is a godchild in the class. This scam appears to have proven to be highly successful. She has successfully found and possibly killed a fairy before, as evidenced by her showing off a plaque with severed fairy wings and a beat up crown. She also knows fairies can be trapped by butterfly nets, and employs a variety of other tools to detect fairies and fairy dust (Most of which are much more refined than those of Crocker's), along with sharp edged melee weaponry. She is shown to be a much more efficient (and effectively more dangerous of a fairy hunter than Mr. Crocker. Also unlike Mr. Crocker, who wants to capture fairies for their magic, Ms. Doombringer appears to only want to capture them for the sheer enjoyment of killing them. Ms. Doombringer also wrote a book on how to hunt fairies