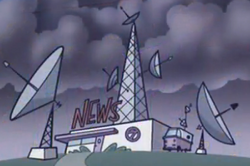 These episodes have not yet aired in the United States.

A new episode was scheduled for May 26.

New episodes will air every saturdays of June at 9:30am.

The regular run of Season 9 kicks off on May 4th, with the episode "Turner & Pooch". New episodes will now air on Saturdays at 9:30am.

Fairly OddParents Season 9 has been officially announced by Frederator Studios. It will begin sometime in 2013.

TVGuide is reporting that eight "new" episodes will be aired the week after the FOP movie. These are most of the Season 7 episodes that have yet to be aired in the US (but are available on DVD). Note that this is still subject to change.

A new half hour episode will air on June 18th called "Invasion of the Dads", a sequel of sorts to the episode "Add-a-Dad". The premiere date for the live action movie is now officially July 9th.

Tomorrow (Sept. 18), two new episodes will be aired in the US: Manic Mom-Day, and Crocker of Gold. Please note that these episodes are now slated to premiere at 11:00 AM Eastern.

New episodes of the Fairly OddParents are coming to America! Be sure to catch "Double-Oh Schnozmo!" and "The Boss of Me" this Septemember 11 at 11:00AM on Nickelodeon!

A Fairly Odd Movie: Grow Up, Timmy Turner!, a live action Fairly OddParents television movie, will be coming to Nickelodeon in 2011!

There is also a new animated special coming soon to the Fairly OddParents called "Love Triangle", which will be a half hour long full episode.

The Fairly OddParents will be returning on Nickelodeon on weekdays at 1:00 PM.

More information on The Fairly OddParents Live Action Movie has been released.

A new Fairly OddParents premiere week is coming the first week of April, from April 5th to 9th, including a possible reappearance of Foop! --Lord Beckett (talk) 04:21, March 25, 2010 (UTC)

Fairly OddParents Season 8 has been officially announced by Frederator Studios. No other details are known at this time. There are also around eighteen unaired episodes of Season 7. The Fairly OddParents is approaching its 10th anniversary (not counting Oh Yeah! Cartoons). It has also been announced that the final episode of Season 7 will be a special involving Foop. 07:51, December 14, 2009 (UTC)

We now have a dedicated news section! This area will give up to date information on the show, changes to the site, featured articles, and more. --Lord Beckett (talk) 19:03, October 30, 2009 (UTC)

Retrieved from "https://fairlyoddparents.fandom.com/wiki/Fairly_Odd_Parents_Wiki:News?oldid=463681"
Community content is available under CC-BY-SA unless otherwise noted.