Fairly Odd Parents Wiki
Register
Don't have an account?
Sign In
Advertisement
in: Species, Other magical beings, Magical,
and 3 more

Elves are a magical race that exist within The Fairly Oddparents. Unlike other races which are a specific kind of magical creature, Elves have many different subsets to them with their own unique abilities and roles.

Unlike other races, and likely due to their many different roles, Elves have a variety of different looks. However, a standard Elf look seems to be present within the show, that is shared by much of the race, even ones with different roles.

This is, being short in stature, with a bald head and buck teeth. They also seem to generally wear hats that involve a crown shape, with a cone on the inside that leads to a star at the end. There may be different designs on the hat, however. 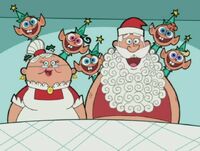 These Elves work at North Pole, helping Santa Claus build toys for kids. They have a knack for building and are able to make toys for children, but can also build many other things as seen in Dad Overboard. 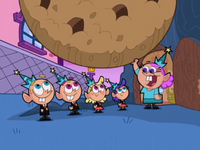 These Elves live in trees and seem to make baked goods as a living, notably cookies. One such tree was located right on the Spellementary School Grounds.

This part of the Elven race seem to have round heads when they are children. The males have buck teeth from this age while the females dont seem to grow them until adulthood.

These Elves work on making shoes, either by themselves or helping out human shoemakers, presumably without their knowledge. They have the ability to turn anything into a pair of shoes.

Evil Elves are a part of the Elven race which seems to be specifically evil. They have grey skin and liver spots, and can be bald or have black hair. They also have yellow eyes with red pupils.

They seem to have no specific duty, other than causing chaos. They sport several weapons, including maces, swords and axes. Evil Elves have a sworn enemy in Unicorns, as established in Birthday Battle.

One of Jorgen Von Strangle's favourite shows, Dancing With The Elves, showing two kinds of Elves tha havent been seen anywhere else.