Beach Bummed! is the twenty-fourth episode of Season 4.

Francis is mean by bullying Timmy several times at the beach. He even kicks sand in Timmy's face. Timmy wishes that he become the strongest guy on the beach. At first, he defends the other kids who Francis is bullying, but Francis comes with a tractor. Luckily a stronger man comes to the beach, this is good because he now can face Francis and his tractors. The problem occurs when green sea weed covers Timmy so he looks like the sea-monster! Now the tanks are chasing him. To make matters worse, Cosmo and Wanda lost their wands in the sand, and are stuck in the crab aquarium at a restaurant, ready to be eaten by customers of Bickles By The Bay.

At a beach near Dimmsdale, many of the local kids and their parents are having their fun ruined at the beach by Francis. Timmy Turner uses his fairies to build a giant sandcastle to impress Trixie Tang, but Francis destroys it and then kicks sand in Timmy and Trixie's faces. Francis then drags Trixie away like a caveman, having won her over with his brute tactics. The life guards won't help Timmy because they are really the "Dimmsdale Emergency Sea Monster Response Team" and only respond to monsters, and the real life guards are slowly running along the beach. Timmy realizes he must become stronger than Francis to stop his beach bullying. Using his fairies, Timmy wishes that he was the strongest guy on the beach. In an instant, Timmy's body comes buff. Cosmo comments that he hopes he doesn't jinx things by noting that this wish couldn't possibly backfire. Wanda then notices they've lost their wands in the sand. However, Timmy is more interested in beating Francis than helping them.

Timmy confronts Francis, who is busy kicking sand into Elmer, Sanjay, and A.J.'s faces to the pleasure of Trixie. Timmy kicks so much sand in Francis' direction that it forms a jail around Francis. Timmy poses on the beach while Sanjay and the others compliment him. While Timmy runs off, Trixie calls to him. He spontaneously kicks sand at her. Annoyed, Trixie tells him that it's in the rules for him to take her back after beating Francis. Timmy, Trixie, and the others enjoy activities on the beach, although sometimes Timmy's excessive strength causes injury to the others. Francis returns with a bulldozer and piles sand on Timmy. He then sets the sand pile on fire with a flamethrower, turning it into glass and leaving Timmy frozen in place. Nearby on the boardwalk, Mr. Bickles is flaunting his latest dream, a seaside restaurant. He has a large strong man called Mr. Galaxy step onto the beach and cut the ribbon. When this happens, the effects of Timmy's wish cause him to become bigger and stronger than Mr. Galaxy.

Timmy's transformation breaks the glass which is sent flying at Francis, cutting off all of his hair, and he runs screaming off the beach. Trixie leaps onto Timmy and gives him a congratulatory hug, but when Timmy hugs her back he breaks her spine. Timmy tries to help her but Trixie tells him to get away because he is a "totally hot monster". Timmy runs off to find Cosmo and Wanda, who are busy trying to find their wands which have been buried in the sand. They unearth Elvis Presley, and eventually find their wands, but they are captured by Mr. Bickles who wants to sell them, in rare green and pink king crab form, to eat at his restaurant. As Timmy asks himself what else could go wrong, Francis shows up in a dump truck and buries him under more sand, and then a whale beaches onto the shore. The whale's presence causes Timmy to grow bigger, and he angrily stomps on the ground, causing a shockwave that sends Francis and his dump truck into the ocean. Sea weed is splashed onto Timmy, causing him to appear like a sea monster. The Sea Monster Response Team lifeguard call for back up. At Mr. Bickles' crab restaurant, a crab is trying to kiss Wanda, but Cosmo prevents that. As Mr. Bickles attempts to scoop up Cosmo to be cooked, Cosmo swaps places with the French crab. Then suddenly, Timmy busts down the wall and scares everyone out of the restaurant. Mr. Bickles asks him if he has a reservation, but Timmy just screams at him and blows him away, before scooping up Cosmo and Wanda and destroying the rest of the restaurant. Timmy stomps back down along the beach toward the direction of Cosmo and Wanda's wands, but a huge landing force of military forces belonging to the Sea Monster Response Team lands on the beach between them, determined to prove they are not a waste of money (in a comical effect, two sailors are shoving dollar bills into a furnace). A tank runs over the McBadbats, but Timmy grabs the tank and throws it at the commanding blimp. The general aboard orders them to fire, but the thrown tank shoots through the blimp, causing it to crash. Timmy then stomps and destroys a large part of the other forces before finally getting to the umbrellas where the wands were. While hiding behind the umbrellas, Timmy wishes himself back to normal. The helicopters and tanks then closing in on the umbrellas and blow them all away. Timmy, now back to normal, scoffs at the bewildered response forces and calls them a waste of money. The SMRT then leave, disappointed.

Back to being a wimp, Timmy relaxes on the beach having learned his lesson. Naturally, Francis marches up to resume his bullying of him. But Timmy throws sea weed over the bully and sics the SMRT on him, chasing Francis off the beach. The real life guards finally showed up, having been running slowly toward them to help for the past ten minutes, but Timmy tells them they are too late, so they slowly run back to the guard post. Timmy says that they do look good, so he, Cosmo, Wanda, Mr. Bickles, and Elvis decide to try it for themselves. Elvis collapses over from exhaustion and tells them to go on without him as the episode ends.

Timmy grows so big that causes an earthquake 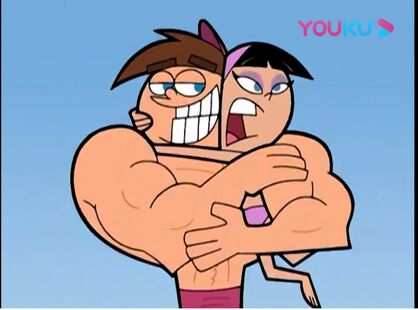 Timmy hugs Trixie so hard that breaks her spine