Atlantis is a legendary city that was supposedly in the Atlantic Ocean. It's origins come from Greek mythology.

A great cataclysm occurred causing it to sink beneath the sea. In the world of the Fairly OddParents, Atlantis was sunk by Cosmo nine times. Because of this, the residents of Atlantis consider Cosmo public enemy number one and dub him "The Accursed One". This remained this way until Timmy was able to make full apologies to the citizens for Cosmo's actions.

It has a very Greek-like design, with some of the buildings having blue orbs on top, and sits on a pedestal.

Cosmo's sinking of Atlantis thousands of years ago was first mentioned in "This is Your Wish". The reason why Cosmo sunk Atlantis was because he was trying to think of a way to make Atlantis cleaner, which ended up sinking the city down into the ocean. The sinking of Atlantis is mentioned again in Pixies Inc.. In the episode, "Something's Fishy", when Cosmo; along with Timmy and Wanda; came into Atlantis, all three of them were captured and sentenced to be eaten by "Kraken" sea creatures. However, Timmy managed to persuade King Greg that Cosmo's sinking of Atlantis actually benefitted Atlanteans. At the end of the episode, everything seemed to have worked out and peace was made, when a giant squid, (inadvertently called by Timmy) shows up and destroys the city of Atlantis. King Greg and the other denizens then declare Timmy the "NEW ACCURSED ONE" before they chase Timmy and his godparents again. It is very likely that at some point after the episode that Timmy fixed Atlantis and made full apologies to the citizens since the issue of him being the "New Accursed One" by Atlantis is not brought up again in later episodes. Atlantis reappeared in Dadlantis, though this time there are no notable buildings and the population has been significantly reduced. The king was now King Neptuna. 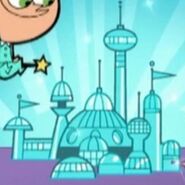 Atlantis from This is Your Wish

Add a photo to this gallery
Retrieved from "https://fairlyoddparents.fandom.com/wiki/Atlantis?oldid=520345"
Community content is available under CC-BY-SA unless otherwise noted.