"It's a Wrap" Retirement Community

"It's a Wrap" Retirement Community is a retirement home for actors who played superheroes on TV. It is the current residence of Catman. It has also been called the Retirement Home of Justice, or just the Home of Justice.

Catman currently lives here as of the episode "Cat-Astrophe", rather than at the Stately West Manor. Due to this, it can be inferred that Catman is now completely retired from acting. Timmy usually visits here for special occasions related to Catman.

Its most recent design is a white, two-floored building, with two smaller sections coming off to either side. All the building's roofs are painted purple, and there is a red brick fireplace coming out from the top of the main building. In the front lawn, there is a white sign with a dark blue background that has the building's name written in pink letters, with a silhouette of a video camera at the top. The sign is surrounded by shrubbery.

The retirement home first appeared in Cat-Astrophe where Timmy, Cosmo, Wanda and Sparky went to visit. Timmy and Sparky went to celebrate Catman's birthday, while Cosmo and Wanda went to visit Cosmo's favourite superhero, Butterfly Boy. While there, Cosmo and Wanda got trapped by Butterfly Boy using a net and forced to look at pictures of his family. At the end of the episode, it gets partly destroyed when Dogman drives into Catman's room in his Pit-Bulldozer. In Whittle Me This, Catman is celebrating his 50th anniversary being a superhero and invites Timmy to the event. Timmy decides not to go but ends up there anyways when Chloe wishes that they would both go there. When they're there, Catman mistakes her as his old partner, Catgirl. Timmy leaves without them seeing, and, thinking he's been kidnapped, takes Chloe along to help rescue him.

Other than Catman, there are a number of other residents at the Retirement home, namely other superheroes. 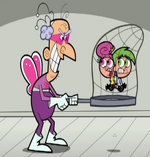 Butterfly Boy appears in the episode Cat-Astrophe. He's a butterfly-themed superhero and has a butterfly net as a signature weapon. In the episode, he uses his net to trap Cosmo and Wanda, which actually works due to fairies being weak to nets. After trapping them he forces them to listen to stories about his grandkids, Ruben and Saul.

Dogman appears in the episode Cat-Astrophe. He is Catman's old archenemy and resides at "It's a Wrap!" Retirement Community, just like Catman. He attempted to defeat Catman but failed to do so. Catman thought Sparky was Dogman, so Timmy convinced the real Dogman to get out and fight Catman. 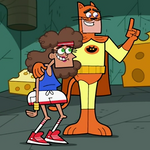 Wonder Gal is Catman's love interest as of Season 10. She appears in the two episodes, Cat 'n Mouse and Knitwits.

The home's look in Gone Flushin'

The home's look in Whittle Me This